A rectangular block of height L and horizontal cross-sectional area A floats at the interface between two immiscible liquids, as shown below. 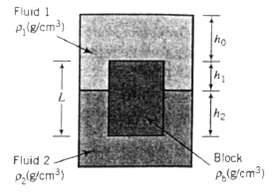 (a) Derive a formula for the block density, pb, in terms of the fluid densities p1 and p2, the heights h0, h1, and h2, and the cross-sectional area A. (It is not necessary that all of these variables appear in the final result).