in S1 units for Bc- Because Bc decreases with increasing temperature, the right side is negative. The superconducting phase has the lower entropy: it is the more ordered phase. As τ → 0, the entropy in both phases will go to zero, consistent with the third law.  What does this imply for the shape of the curve of Bc versus τ?

(b) At τ = τc, we have Bc = 0 and hence σs = σN. Show that this result has the following consequences: (1) The two free energy curves do not cross at τc but merge, as shown in Figure (2) The two energies are the same: Us(τc) = UN(τc). (3) There is no latent heat associated with the transition at τ = τc. What is the latent heat of the transition when carried out in a magnetic field, at τ < τc?

(c) Show that CS and CN, the heat capacities per unit volume, are related by

Figure 8.18 is a plot of C/T vs T2 and shows that CS decreases much faster than linearly with decreasing τ, while CN decreases as Tτ. For τ << τc, ∆C is dominated by CN. Show that this implies

Experimental values of the free energy as a function of temperature for aluminum in the superconducting state and in the normal state. Below the transition temperature Tc = 1.180 K the free energy is lower in the superconducting state. The two curves merge at the transition temperature, so that the phase transition is second order (there is no latent heat of transition at Tc). The curve FS is measured in zero magnetic field, and FN is measured in a magnetic field sufficient to put the specimen in the normal state. Courtesy of N.E. Phillips. 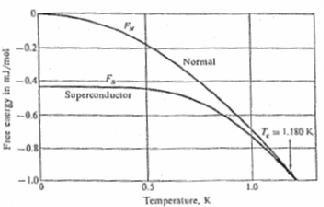