(a) Suppose a charge distribution P1 (r) produces a potential V1 (r), and some other charge distribution p2(r) produces a potential V2(r). [The two situations may have nothing in common, for all I care–perhaps number 1 is a uniformly charged sphere and number 2 is a parallel-plate capacitor. Please understand that Pl and 02 are not present at the same time; we are talking about two different problems, one in which only Pl is present, and another in which only ,02 is present.] Prove Green’s reciprocity theorem:

(b) Suppose now that you have two separated conductors (Fig. 3.41). If you charge up conductor a by amount Q (leaving b uncharged) the resulting potential of b is, say, Vab. On the other hand, if you put that same charge Q on conductor b (leaving a uncharged) the potential of a would be Vba. Use Green’s reciprocity theorem to show that Vab = Vba (an astonishing result, since we assumed nothing about the shapes or placement of the conductors). 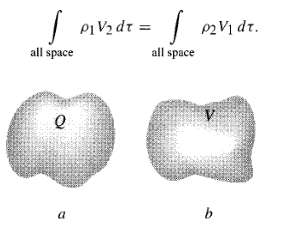