A two-week study has been performed on a 12-station transfer line that is used to partially machine engine heads for a major automotive company. During the 80 hours of observation, the line was down a total of 42 hours, and a total of 1689 parts were completed. The accompanying table lists the machining operation performed at each station, the process times, and the downtime occurrences for each station. Transfer time between stations is 6 sec. To address the downtime problem, it has been proposed to divide the line into two stages, each consisting of six stations. The storage buffer between the stages would have a storage capacity of 20 parts. Determine
(a) Line efficiency and production rate of current one-stage configuration, and
(b) Line efficiency and production rate of proposed two-stage configuration.
(c) Given that the line is to be divided into two stages, should each stage consist of six stations as proposed, or is there a better division of stations into stages? Support your answer. 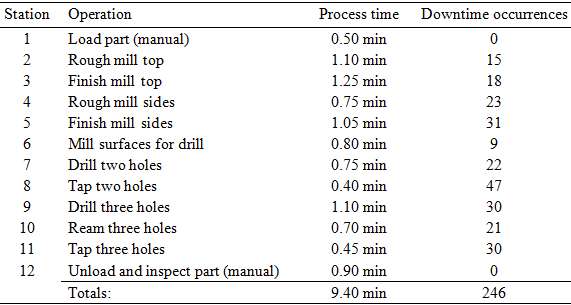