Activity-based Costing in a Government. The midsize City of Orangeville funds an animal control program intended to minimize the danger stray dogs pose to people and property. The program is under scrutiny because of current budgetary constraints and constituency pressure. An animal control warden responds to each complaint made by citizens about dogs running loose. Approximately one in six complaints results in the capture of a dog. When a dog is caught, the warden must drive it to a kennel 20 miles from the center of the city. Donnaâs Kennels, a privately owned animal boarding establishment, is under contract with the city to board, feed, and care for the impounded dogs. It is a no-kill shelter (i.e., it does not euthanize healthy animals), and dogs remain there until they are claimed by their owners or adopted. The programâs complaint and impoundment data for the past four years follow:

Costs of Orangevilleâs animal control program are as follows. The city employs two animal control wardens, a clerk, and a program director. The task of the wardens is to respond to complaints, drive to the site, search for the dog, and deliver it (if it is found) to Donnaâs Kennels. The clerk is responsible for issuing licenses to dogs that are returned to their owners or are adopted, as well as tracking correspondence between Donnaâs Kennels and the city. The clerk also tracks program statistics and provides support to the program director.
The city owns and operates two vehicles specially designed for impounding and transporting stray dogs. For $10 per dog per day, Donnaâs Kennels provides shelter, food, and routine veterinary care. On average, 60 percent of impounded dogs are returned to their owners in seven days. The other 40 percent stay at Donnaâs Kennels for an average of 14 days before being adopted. Summarized program costs follow: 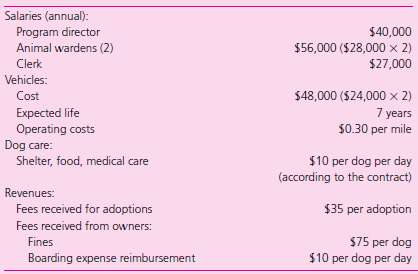 Critics of the animal control program argue that it costs too much to drive to the distant kennel to deliver an impounded dog. They have suggested that the city convert a vacant building within the city limits into an animal shelter to save on transportation costs. Prompted by the need to cut the city budget and address the public outcry, city officials are reviewing the budget proposal for the animal control program and are looking for ways to reduce the programâs costs.
Required
a. Prepare a diagram that identifies (1) the activities related to the animal control program, (2) the relationship among each of the activities, (3) the resources required for each activity, and (4) the cost drivers for each activity. Use the format of Illustration 13â9.
b. Calculate the cost of each activity. Show your work. Use the format of Illustration 13â10.
c. Interpret the results of the activity based-costingexample.