CaroliNet is an Internet service provider for residential consumers in North Carolina. The company is planning to expand and offer Internet service in South Carolina. The company wants to establish a set of hubs throughout the state to ensure that all residents of the state can access at least one of their hubs via a local phone call. Local phone service is available between all adjacent counties throughout the state. Figure (and the file FIG on your data disk) show an Excel spreadsheet with a matrix indicating county adjacencies throughout the state. That is, values of 1 in the matrix indicate counties that are adjacent to one another while values of 0 indicate counties that are not adjacent to one another. (A county is also considered to be adjacent to itself.)
a. Assume CaroliNet wants to minimize the number of hubs it must install. In what counties should the hubs be installed?
b. Suppose CaroliNet is willing to install hubs in exactly ten different counties. In what counties should the hubs be installed if the company wants to maximize its servicecoverage? 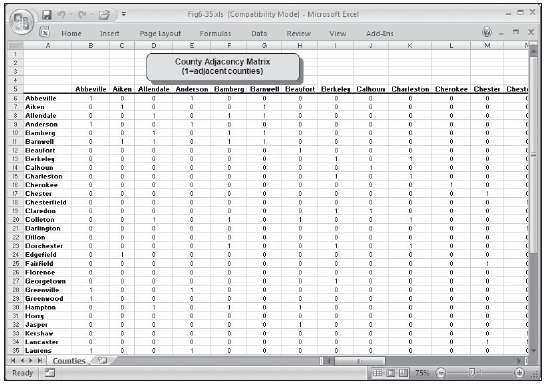