Central Garage Internal Service Fund. The City of Ashville operates an internal service fund to provide garage space and repairs for all city-owned-and-operated vehicles. The Central Garage Fund was established by a contribution of $300,000 from the General Fund on July 1, 2008, at which time the land and building were acquired. The post-closing trial balance at June 30, 2010, was as follows: 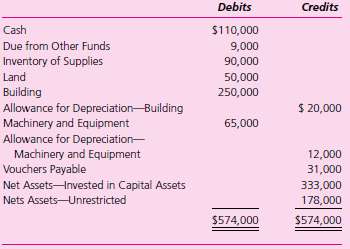 The following information applies to the fiscal year ended June 30. 2011:
1. Supplies were purchased on account for $92,000; the perpetual inventory method is used.
2. The cost of supplies used during the year ended June 30, 2011, s $110,000. A physical count taken as of that date showed materials and supplies on hand totaled $72,000 at cost.
3. Salaries and wages paid to employees totaled $235,000, including related costs.
4. Billings totaling $30,000 were received from the enterprise fund for utility charges. The Central Garage Fund paid $27,000 of the amount owed.
5. Depreciation of the building was recorded in the amount of $10,000; depreciation of the machinery and equipment amounted to $9,000.
6. Billings to other departments for services provided to them were as follows:
General Fund$270,000
Special Revenue Fund 37,000
Water and Sewer Utility Fund 90,000
7. Unpaid interfund receivable balances were as follows: