Change in Estimate and Error; Financial Statements Presented below are the comparative income statements for Pannebecker Inc. for the years 2009 and 2010. The following additional information is provided:

1. In 2010, Pannebecker Inc. decided to switch its depreciation method from sum-of-the-years’-digits to the straight-line method. The assets were purchased at the beginning of 2009 for $90,000 with an estimated useful life of 4 years and no salvage value. (The 2010 income statement contains depreciation expense of $27,000 on the assets purchased at the beginning of 2009.) 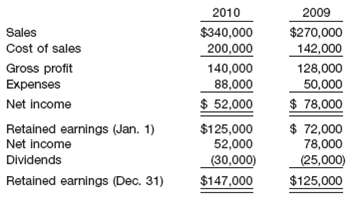