Company is a small but growing manufacturer of telecommunications equipment. The company has no sales force of its own; rather, it relies completely on independent sales agents to market its products. These agents are paid a commission of 15% of selling price for all items sold. Barbara Cheney, Pittman’s controller, has just prepared the company’s budgeted income statement for next year. The statement follows: 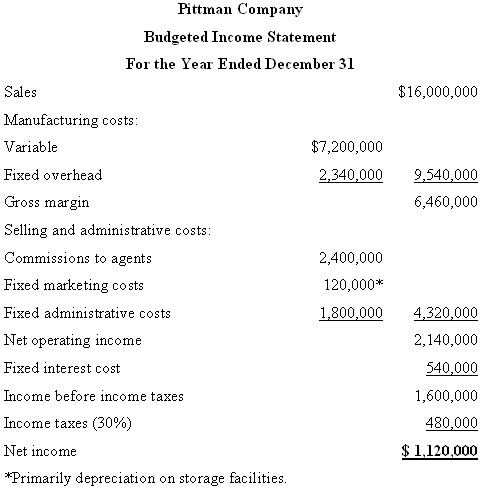 As Barbara handed the statement to Karl Vecci, Pittman’s president, she commented, “I went ahead and used the agents’ 15% commission rate in completing these statements, but we’ve just learned that they refuse to handle our products next year unless we increase the commission rate to 20%:’ “That’s the last straw,” Karl replied angrily. “Those agents have been demanding more and more, and this time they’ve gone too far. How can they possibly defend a 20% commission rate?” “They claim that after paying for advertising, travel, and the other costs of promotion, there’s nothing left over for profit:’ replied Barbara. “I say it’s just plain robbery:’ retorted Karl. “And I also say it’s time we dumped those guys and got our own sales force. Can you get your people to work up some cost figures for us to look at?”

“Super,” replied Karl. “And I noticed that the $2,400,000 is just what we’re paying the agents under the old 15% commission rate:’ “It’s even better than that,” explained Barbara. “We can actually save $75,000 a year because that’s what we’re having to pay the auditing firm now to check out the agents’ reports. So our overall administrative costs would be less.” “Pull all of these numbers together and we’ll show them to the executive committee tomorrow’ said Karl. “With the approval of the committee, we can move on the matter immediately:’

a.    The agents’ commission rate remains unchanged at 15%.

c.    The company employs its own sales force.

2.         Assume that Pittman Company decides to continue selling through agents and pays the 20Q commission rate. Determine the volume of sales that would he required to generate the same net income as contained in the budgeted income statement for next year.

3.         Determine the volume of sales at which net income would be equal regardless of whether Pin- man Company sells through agents (at a 20% commission rate) or employs its own sales force.

4.         Compute the degree of operating leverage that the company would expect to have on December 31 at the end of next year assuming;

a.    The agents’ commission rate remains unchanged at 15%.

c.    The company employs its own sales force.

Use income before income taxes in your operating leverage computation.

5.         Based on the data in (1) through (4) above, make a recommendation as to whether the company should continue to use sales agents (at a 20% commission rate) or employ its own sales force. Give reasons for your answer.