Comprehensive Capital Assets/Serial Bond Problem. Transaction data related to the City of Chambersâs issuance of serial bonds to finance street and park improvements follow. Utilizing worksheets formatted as shown at the end of the problem, prepare all necessary journal entries for these transactions in the cityâs capital projects fund, debt service fund, and governmental activities at the government-wide level. You may ignore related entries in the General Fund. Round all amounts to the nearest whole dollar.
a. On July 1, 2010, the first day of its fiscal year, the City of Chambers issued serial bonds with a face value totaling $5,000,000 and having maturities ranging from one to 20 years to make certain street and park improvements. The bonds were issued at 102 and bear interest of 5 percent per annum, payable semiannually on January 1 and July 1, with the first payment due on January 1, 2011. The first installment of principal in the amount of $250,000 is due on July 1, 2011. Premiums on bonds issued must be deposited directly in the debt service fund and be used for payment of bond interest. Premiums are amortized using the straight-line method in the governmental activities journal but are not amortized in the debt service fund. Debt service for the serial bonds will be provided by a one-quarter-cent city sales tax imposed on every dollar of sales in the city.
(1) Record the FY 2011 budget for the Serial Bond Debt Service Fund, utilizing worksheets formatted as shown at the end of this problem. The city estimates that the sales tax will generate $440,000 in FY 2011. An appropriation needs to be provided only for the interest payment due on January 1, 2011.
(2) Record the issuance of the bonds, again utilizing your worksheets.
b. On August 2, 2010, the city entered into a $4,800,000 contract with Central Paving and Construction. Work on street and park improvement projects is expected to begin immediately and continue until August 2011.
c. On August 10, 2010, the capital project fund paid the cityâs Utility Fund $42,000 for relocating power lines and poles to facilitate street widening. No encumbrance had been recorded for this service.
d. On August 20, 2010, the cityâs Public Works Department billed the capital projects fund $30,000 for engineering and other design assistance. This amount was paid.
e. Street and park improvement sales taxes for debt service of $248,000 were collected in the six months ending December 31, 2010.
j On January 1, 2011, the city mailed checks to bondholders for semiannual interest on the bonds.
g. On January 15, 2011. Central Paving and Construction submitted a billing to the city for $2,500,000. The cityâs public works inspector agrees that all milestones have been met for this portion of the work.
h. On February 2, 2011, the city paid Central Paving and Construction the amount it had billed, except for 4 percent that was withheld as a retained percentage per terms of the contract.
i. During the six months ended June 30, 2011, sales tax collections for debt service amounted to $194,600.
j. Make all appropriate adjusting and closing entries at June 30, 2011, the end of the fiscal year Based on authorization from the Public Works Department, $1,650,000 of construction work in progress was reclassified as infrastructure and another $250,000 was reclassified as improvements other than buildings. (Ignore closing entry for governmental activities.)
k. Reestablish the Encumbrances account balance in the capital projects fund effective July 1, 2011.
l. Record the FY 2012 budget for the debt service fund, assuming sales revenues are estimated at $492,000.
m. On July 1, 2011, the city mailed checks totaling $125,000 to all bondholders for semiannual interest and $250,000 to holders of record for bonds being redeemed.
n. On August 14, 2011. Central Paving and Construction submitted a final billing to the city for $2,300,000.
o. On August 23, 2011, the city paid the August 14 billing, except for a 4 percent retained percentage.
p. Upon final inspection by the Public âWorks Department, it was discovered that the contractor had failed to provide all required landscaping and certain other work for the street and park improvements. Public works employees completed this work at a total cost of $210,000. This amount was transferred to the General Fund using all retained cash and other cash of the capital projects fund.
q. The balance of the Construction Work in Progress account was reclassified as $150,000 to Improvements Other Than Buildings and the remainder to Infrastructure.
r. All remaining cash in the capital projects fund was transferred to the debt service fund and all accounts of the capital projects fund wereclosed. 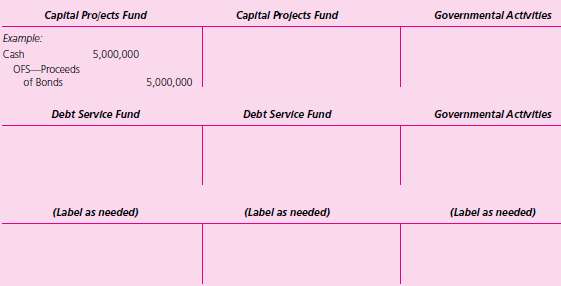