A Geiger tube is a radiation detector that essentially consists of a closed, hollow metal cylinder (the cathode) of inner radius ra and a coaxial cylindrical wire (the anode) of radius rb (Fig. P25.61). The charge per unit length on the anode is 1, while the charge per unit length on the cathode is -A. A gas fills the space between the electrodes. When a high-energy elementary particle passes through this space, it can ionize an atom of the gas. The strong electric field makes the resulting ion and electron accelerate in opposite directions. They strike other molecules of the gas to ionize them, producing an avalanche of electrical discharge. The pulse of electric current between the wire and the cylinder is counted by an external circuit.
(a) Show that the magnitude of the potential difference between the wire and the cylinder is
(b) Show that the magnitude of the electric field in the space between cathode and anode is given by where r is the distance from the axis of the anode to the point where the field is to be calculated. 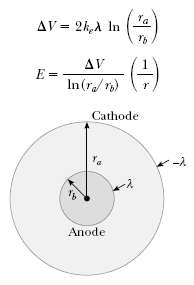