Subsequent Events your firm has been engaged to examine the financial statements of Alma den Corporation for the year 2010. The bookkeeper who maintains the financial records has prepared all the unaudited financial statements for the corporation since its organization on January 2, 2005. The client provides you with the information below. The supplementary information below is also provided.

1. On May 1, 2010, the corporation issued at 95.4, $750,000 of bonds to finance plant expansion. The long-term bond agreement provided for the annual payment of interest every May 1. The existing plant was pledged as security for the loan. Use the straight-line method for discount amortization.

2. The bookkeeper made the following mistakes.

(b) In 2010, accrued wages in the amount of $225,000 were omitted from the balance sheet, and these expenses were not charged on the income statement.

3. A major competitor has introduced a line of products that will compete directly with Alma den’s primary line, now being produced in a specially designed new plant. Because of manufacturing innovations, the competitor’s line will be of comparable quality but priced 50% below Alma den’s line. The competitor announced its new line on January 14, 2011. Alma den indicates that the company will meet the lower prices that are high enough to cover variable manufacturing and selling expenses but permit recovery of only a portion of fixed costs.

4. You learned on January 28, 2011, prior to completion of the audit, of heavy damage because of a recent fire to one of Alma den’s two plants; the loss will not be reimbursed by insurance. The newspapers described the event in detail.

Analyze the above information to prepare a corrected balance sheet for Alma den in accordance with proper accounting and reporting principles. Prepare a description of any notes that might need to be prepared. The books are closed and adjustments to income are to be made through retained earnings. 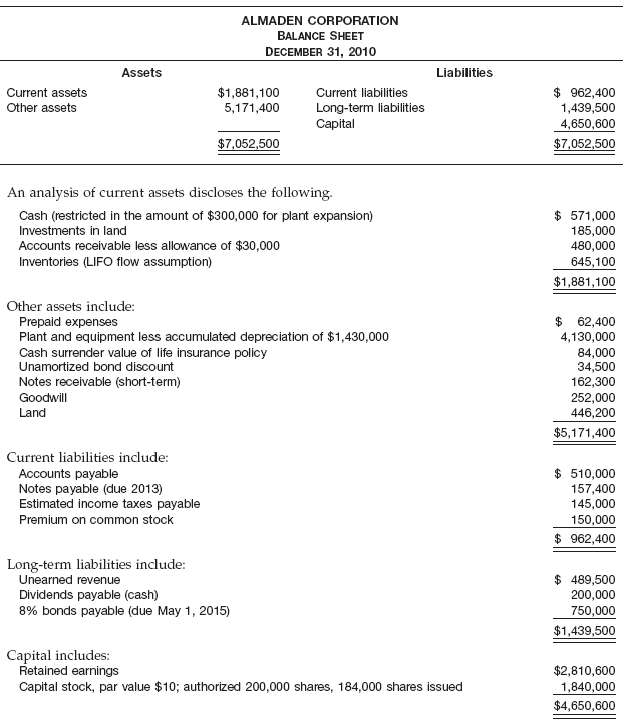