Table 1-3 gives you data on the exchange rate between the U.K. pound and the U.S. dollar (number of U.K. pounds per U.S. dollar) as well as the consumer price indexes in the two countries for the period 1985-2007.
a. Plot the exchange rate (ER) and the two consumer price indexes against time, measured in years.
b. Divide the U.S. CPI by the U.K. CPI and call it the relative price ratio (RPR).
c. Plot ER against RPR.
d. Visually sketch a regression line through the scatter points.
3 U.K. POUND / $ EXCHANGE RATE BETWEEN U.K. POUND AND U.S. DOLLAR AND THE CPI IN THE UNITED STATES AND THE U.K., 1985-2007 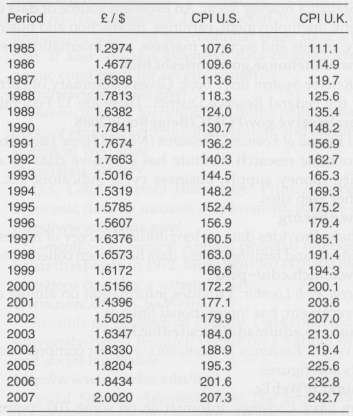