Youngâs double-slit experiment underlies the Instrument Landing System used to guide aircraft to safe landings when the visibility is poor. Although real systems are more complicated than the example described here, they operate on the same principles. A pilot is trying to align her plane with a runway, as suggested in Figure P37.11a. Two radio antennas A1 and A2 are positioned adjacent to the runway, separated by 40.0 m. The antennas broadcast unmodulated coherent radio waves at 30.0 MHz.
(a) Find the wavelength of the waves. The pilot âlocks ontoâ the strong signal radiated along an interference maximum, and steers the plane to keep the received signal strong. If she has found the central maximum, the plane will have just the right heading to land when it reaches the runway.
(b) What If? Suppose instead that the plane is flying along the first side maximum (Fig. P37.11b). How far to the side of the runway centerline will the plane be when it is 2.00 km from the antennas?
(c) It is possible to tell the pilot she is on the wrong maximum by sending out two signals from each antenna and equipping the aircraft with a two-channel receiver. The ratio of the two frequencies must not be the ratio of small integers (such as 3/4). Explain how this two-frequency system would work, and why it would not necessarily work if the frequencies were related by an integer ratio. 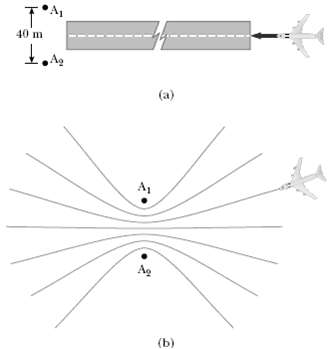